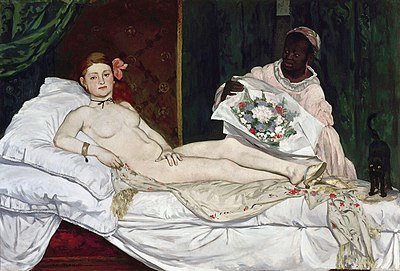 Jo Rhymer, one of our most popular lecturers, will be presenting a series of four lectures over the next three months on different aspects of Impressionism. All are stand alone but together will cover new and varied territory.
Experimental painting technique and unconventional subject matter are often associated with Impressionism.

In this first session we will see audacious works by the Realist painter, Gustave Courbet, whose images of modern life influenced the Impressionist generation. We will look again at Eduard Manet’s iconic work, Olympia, to consider the model, Laure and to discuss Manet’s relationship to Impressionism. And we will discuss paintings by Frédéric Bazille (1841-1870), whose life was tragically cut short by the Franco-Prussian War, but whose works provide fascinating insights into the early Impressionist period.