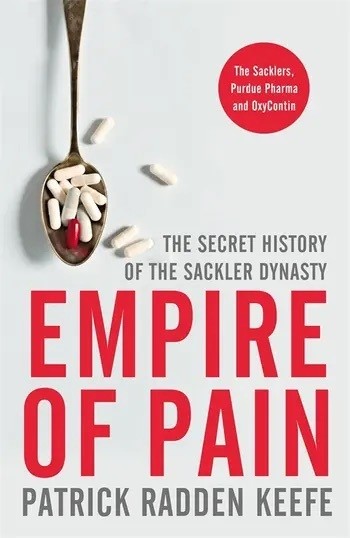 Join us for lunch at Coco Momo Restaurant & Bar in Kensington (your own tab), to discuss Empire of Pain by Patrick Radden Keefe

Empire of Pain is a work of nonfiction that has the dramatic scope and moral power of a Victorian novel. It’s about corruption that is so profitable no one wants to see it and denial so embedded it’s almost hereditary.

The book focuses on the Sackler family who, for the second half of the 20th century and for much of the 21st, were very wealthy and very secretive. It would turn out that they had a lot to be secretive about.

Keefe begins his story with Arthur Sackler, the eldest of three boys born to a Ukrainian Jewish grocer in Brooklyn in 1913. Arthur was an extraordinary figure, highly gifted and even more motivated. He funded himself through college and medical school, partly by his work as an advertising copywriter, trained as a psychiatrist and became a leading medical publisher.

Empire of Pain is a gripping tale of capitalism at its most innovative and ruthless, which Keefe tells with a masterful grasp of the material. Purdue Pharma promised a life free of pain. But, as the author notes, while the company knew everything about how to get people on to OxyContin, they seemed to have little idea of, or interest in, how to get them off it.

Please click the free ticket below to register for the Book Group meeting and lunch under your own tab.