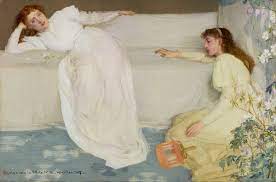 This set of two lectures by Jo Rhymer explores the world of James McNeill Whistler 1834 – 1903.  He was an American artist active during the American Gilded Age and based primarily in England.

In the first session, Jo will look at Whistler’s images of the Thames and his connections with French avant-garde artists including Gustave Courbet, who worked closely together with Whistler in Normandy.

In the second session, Jo will focus on the exhibition at the Royal Academy “Whistler’s Woman In White; Joanna Hifferman” which runs from 26 February – 22 May 2022.

Many of Whistler’s works feature the red-haired figure of Joanna Hifferman.  Her relationship with Whistler ran deeper than artist and muse.  Her close professional and personal relationship with the artist lasted for two decades, yet little about her role or influence as a friend, model, lover and collaborator in his life has been explored – until now.

This exhibition brings together portraits of Hifferman, ranging from innovative paintings, prints and drawings that challenged cultural norms and established Whistler’s reputation as one of the most influential artists of the late 19th century.