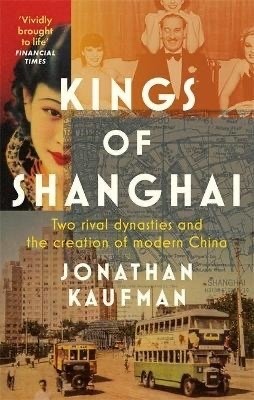 Join us to discuss the novel, Kings of Shanghai by Jonathan Kaufman.

By the 1930s, the Sassoons had been doing business in China for a century, rivalled in wealth and influence by only one other dynasty – the Kadoories. These two Jewish families, both originally from Baghdad, stood astride Chinese business and politics for more than one hundred and seventy-five years, profiting from the Opium Wars; surviving Japanese occupation; courting Chiang Kai-shek; and nearly losing everything as the Communists swept into power. In Kings of Shanghai, Jonathan Kaufman tells the remarkable history of how these families ignited an economic boom and opened China to the world, but remained blind to the country’s deep inequality and to the political turmoil on their doorsteps. In a story stretching from Baghdad to Hong Kong to Shanghai to London, Kaufman enters the lives and minds of these ambitious men and women to forge a tale of opium smuggling, family rivalry, political intrigue and survival.

We will be meeting at a member’s home in Chiswick, W4

Please book a free ticket below to register your interest.