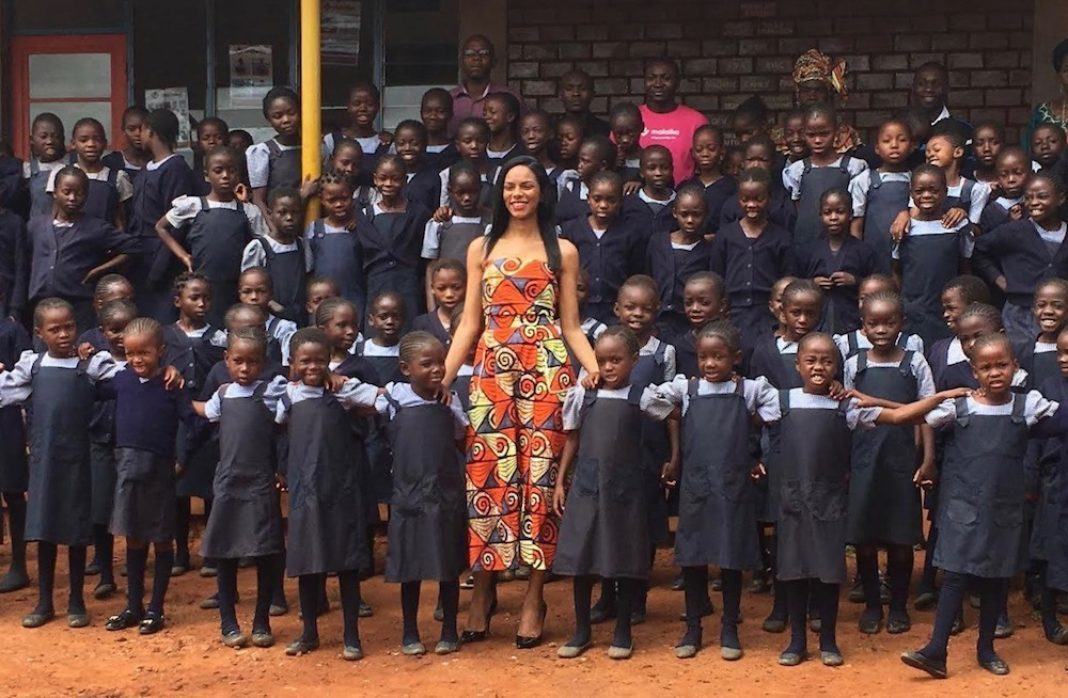 Noëlla Coursaris Musunka, a Congolese/Cypriot model, humanitarian, and Ambassador for The Global Fund to Fight AIDS, Tuberculosis & Malaria was born in the Democratic Republic of Congo (DRC). When Noëlla was only five, her family suffered a terrible tragedy when her father suddenly died.

After a 13-year absence from the DRC, Noëlla finally returned to her homeland to meet her mother. After witnessing first-hand the poverty and lack of opportunity for women in the country, Noëlla promised herself that she would one day make a difference. In 2007, Noëlla founded Malaika, a non-profit grassroots organisation that empowers Congolese girls and their communities through education and health programmes in the DRC. Malaika began by building a school for girls. Constructed in phases beginning in 2011, the Malaika School is a free accredited primary and secondary school that provides a
comprehensive and high-quality education to more than 300 girls.

Beyond the school, Malaika is impacting the surrounding village through its Community Centre, built in partnership with FIFA, which provides education, health,and sports programming to approximately 7,000 youths and adults per year.In addition, the organisation has built and refurbished 17 wells that together supply fresh water to 30,000 people a year, greatly reducing water-borne disease and illness.

Malaika operates in the South-eastern region of the Democratic Republic of Congo. Before Malaika, the underserved area had no access to electricity, clean water, or educational facilities. Malaika’s vision is to bring transformation to the DRC by providing the tools and opportunities for the Congolese people to move forward on their own terms.

Noëlla is established as one of the most sought-after speakers on the subject of girls’ education. An advocate for peace, she has spoken to countless international audiences, including the 2018 World Economic Forum at Davos,UNICEF and the UK Parliament. She has also appeared several times alongside President Clinton on Clinton Global Initiative panels. Noëlla has been interviewed about her philanthropic work on global news outlets such as CNN and the BBC, has given aTED talk and presented in front of top executives from multinationals. She has been named one of ELLE’s incredible women shaping Africa and one of Lifestyles’most powerful women in philanthropy. More recently, Noëlla had a featured interview in The Times
which went on to appear in the week.

Alongside being a mother to two young children, Noëlla continues to work as a model but now her passion is to model with meaning, using her profile to raise awareness for causes she believes in as a mother,a feminist and a believer in the intrinsic human right to education, health and opportunity.

GENERAL MEETING SCHEDULE:
9:30am – 10:30am Registration. Coffee/tea, activities sign-up and shopping
10:35am Doors to the auditorium open
10:45am – 12noon Club announcements followed by Guest Speaker
12:30 – 2:30pm Hospitality lunch* at Ognisko

*You can reserve your place at the lunch ahead of time by emailing hospitality@kcwc.org.uk.Alternatively, you may sign-up upon arrival at the General Meeting. Note that places are limited and we operate on a first-come, first-serve basis. Members, new members and guests are welcome. There is a £10 entrance fee for non-members, which is redeemable toward your membership fee on the day. Please see kcwc AT-A-GLANCE for important details about the General Meetings.