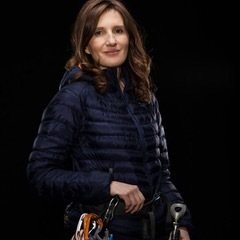 If 2020 into 2021 doesn’t qualify as requiring resilience and determination, I can’t imagine what would! Ideal, then, that we welcome to the RGS – renowned for celebrating the intrepid courage of explorers – our May speaker, rescheduled after cancellation last year. Maria “Masha” Gordon is a board executive, philanthropist and mother of two. After a career in journalism for The Washington Post in Moscow and the US, Masha spent the next 16 years working for Goldman Sachs. But KCWC features her as another accomplished woman, this time committed to the passionate pursuit of alpinism, and as founder of Grit and Rock, a charity administering expedition grants exclusively to women.

In October 2015, Masha embarked on a journey to set a women’s world record in the Explorers Grand Slam, an endurance challenge that features climbing the highest peaks on every continent – including Everest – AND skiing to the North and South Poles. Join us as she shares her adventures helping us explore how we might all build courage through personal reinvention and grit.